Scotch Bonnet pepper seeds produce brightly coloured chile peppers widely used in Jamaican and other Caribbean cooking and have a flavour profile distinct from that of its close cousin, the Habanero. Scotch Bonnets must be used if you want the traditional jerk paste flavour.

Scotch Bonnet pepper seeds produce the brightly coloured chile peppers widely used in Jamaican and other Caribbean cooking and have a distinct flavour profile from its close cousin, the Habanero. Scotch Bonnets are required if you want the traditional flavour of jerk paste.

So, without further ado, let us get started.

What Should You Think About Before Planting  Scotch Bonnet Pepper Seeds?

Select a location that receives full or partial sun and is protected from strong winds. It is critical to locate them in your garden, where they will receive the recommended amount of sunlight.

Now let’s get down with our main event and learn about how to plant these seeds, And try to follow our instructions and advice step by step-

Begin by putting the necessary seed starter mix into a mixing bowl (or similar container). Slowly drizzle in the water, mixing to moisten the mixture evenly. When squeezed, the soil should stick together but not drip water.

Fill your seed cell trays with the pre-moistened seed starter mix. Lightly press the mixture with your fingers until you feel some resistance. Don’t over-pack, but don’t under-pack either (the soil will collapse the first time you water).

To stay organised if you’re growing multiple varieties, label the seedling cells before planting. Place 1-2 seeds in the centre of each cell’s soil. We occasionally plant multiple seeds to ensure that at least one of them germinates in each cell. If multiple plants sprout in the same cell, you can pluck them out early, leaving only one plant per cell.

Each seed should be pressed about 1/8-1/4′′ into the soil’s surface. We gently press the seeds in with a pencil or pen tip. Then, cover the seeds with the surrounding soil and tamp them down.

Step 5: Spritz the seeds with water to moisten them and protect them with a humidity dome.

Spray the soil’s surface with water once the seeds have been covered. We usually spray each cell 6-8 times to ensure the seeds are moist beneath the surface. Seedling cell spraying

Cover the trays with a humidity dome once the seeds have been planted. If you’re making your seed cells, you can achieve the same effect by using a reusable plastic lid from a food storage container or something similar. This will keep the seeds from drying out.

Place the entire setup in a warm environment. Scotch bonnets germinate best in temperatures ranging from 80 to 90 degrees Fahrenheit. We use a seedling heat mat to control temperature during germination, but above the refrigerator or in an upstairs room can also work.

Seeds do not require light to germinate; instead, they require warmth, moisture, and oxygen. Lighting will be required only after the seeds sprout.

While you’re waiting for your scotch bonnets to sprout, fan out the trays daily to give them some fresh air. While you’re at it, check the soil’s surface to see if it needs a spritz of water to keep the seeds moist – never let them dry out!

What else do you call Scotch bonnet peppers?

Scotch bonnet (also known as Bonney peppers or Caribbean red peppers) is a chilli pepper variety named after its resemblance to a tam o’ shanter hat.

Is it necessary to remove the seeds from a scotch bonnet?

When preparing chillies, avoid touching any sensitive areas of your skin or eyes. Removing the membrane and seeds from the inside of the scotch bonnet pepper can help reduce the heat significantly. This is where the majority of the heat in the pepper is stored.

Can I substitute cayenne pepper for the scotch bonnet?

Cayenne peppers are a common ingredient in a variety of dishes. They can be used in place of the hot, spicy Scotch bonnet pepper. Scotch Bonnets range in heat from 100,000 to 350,000 SHU.

These are the planting instructions for Scotch Bonnet Pepper Seeds.

Scotch bonnets should be seeded inside before the conclusion of the winter. Generally, start scotch bonnet seeds around six weeks before the latest frost date. This stage of indoor growth is crucial for preparing the plants for outdoor growth once the weather warms up.

You must look after your plants and strictly adhere to the proper protocols.

If you have any comments or questions concerning today’s story, feel free to express them below. We will make every effort to react as quickly as possible. 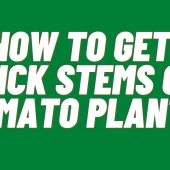 How To Get Thick Stems On Tomato Plants? 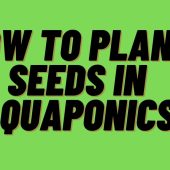 How to Plant Seeds in Aquaponics