How to Plant Smartweed

It’s native to much of North America, Asia, Europe, and sections of Africa, and it’s also found in Mexico, South America, and southern Africa as an imported species. When it becomes overrun, it is frequently regarded as a noxious weed.

Flowers are one of nature’s ways of expressing joy. This article describes how to plant Smartweed correctly. So, let’s get started.

Smartweed is a kind of plant. Medicine is made from the whole plant. Smartweed tea is used to halt bleeding caused by haemorrhoids, menstrual bleeding, and uterine hemorrhage. They use it to cure diarrhea as well. To cleanse bloodied wounds, some people use smartweed straight to the skin.

The safety of smartweed is unknown. It might induce stomach discomfort and other adverse effects when taken by oral. Handling the fresh plant might cause skin discomfort and edema (inflammation). So, while smartweed may be safe at times, it is unknown if it is always safe. Fish, garden songbirds, quail, and aquatic macroinvertebrates eat this plant, making it an excellent addition to koi or fish ponds.

It is a crucial food source for purple copper butterflies, and ducks frequently consume its seeds. The seeds have also been reported to attract muskrats and raccoons. Furthermore, it is an ecologically significant plant for pollinators. Goats have been observed foraging on a variety of emergent flora. There are no recognized biological management strategies for water smartweed at this time. Herbicides are a more robust choice, but they come with a health risk.

Let’s get the right things done faster and learn how to plant Smartweed.

Planting in the Spring

After the final possibility of frost has passed, plant. Drill 15–20 pounds per acre into the ground 1/4”–1/2” deep, then roll. Spin spread 200 pounds of 46-0-0 and 50 lbs of 16-16-16 for fertilizer. Seed can be spun distributed at a rate of 20–25 pounds per acre if drilling isn’t practicable. Apply fertilizer at the same rate as before, harrow softly to cover seed, and roll if feasible.

Planting in the Fall

In most parts of the country, smartweed can also be planted in the late fall, starting in late September. Follow the same steps as before, but use just 100 pounds of 16-16-16 fertilizer. For the winter, the seed will be dormant. It might be underwater or in a puddle of water. If the seed is submerged, it will sprout after removing the water. It’s ideal to do this as close to the final frost date as possible.

Smartweed reseeds well and should come back year after year. A volunteer field can become overly thick at times, resulting in too much competition for water and nutrients. When this happens, use a cultipacker with the teeth down to thin out the plants in the field. It may appear a horrible field at first, but it will eventually improve.

Smartweed thrives in full sun or light shade, nutrient-rich water, or well-irrigated deep soil. Planting should be limited to level areas or slopes of less than 20 degrees. Sand, clay, loam, peat, shingle, manure, underwater silt, and black muck are also good places for it to flourish. As previously stated, soil pH should be between 3.0 and 8.0, with a pH of around > 4.5 being optimum. When the plant is flooded, it takes on an aquatic appearance.

Water smartweed thrives in calm water, slow-to-moderate-flowing streams and rivers, and may withstand seasonal spates but not intense wave action in huge lakes. The floating form, which may be found at depths of 30–200 cm, can withstand turbidity produced by silt or algae, as well as mesotrophic or eutrophic conditions and brackish saltwater water.

Rainfall that is both regular and heavy is beneficial and promotes growth. The plant gets xeromorphic and stops flowering during a long summer drought. A constantly windy environment might have the same effect despite proper soil moisture. It is seldom seen in very eutrophic or limy waters.

Is it possible to grow smartweed in water?

Water smartweed thrives in calm water, slow-to-moderate-flowing streams and rivers, and may withstand seasonal spates but not intense wave action in huge lakes.

When it comes to smartweed, how long does it take to grow?

The equipment mechanically breaks dormancy and allows the seed to be sown in the spring by scratching the hard seed coat. Some seeds may not sprout until the following year, even after this technique. Smartweed might take 2 to 4 weeks to sprout, unlike wild millet, corn, or buckwheat. In 60-80 days, the plant matures.

What is the purpose of smartweed?

Smartweed is a kind of plant. Medicine is made from the whole plant. Smartweed tea is used to halt hemorrhoids, menstrual flow, and uterine bleeding. They use it to treat diarrhea as well.

Is smartweed a year-round plant?

Swamp smartweed has a similar look to Pennsylvania smartweed and lady’s thumb, but it is generally considerably bigger and perennial with long, creeping, woody rhizomes. Tillage can regulate perennial plants that arise from the taproot in mid-spring.

How can you keep smartweed under control?

Grazon Next HL, Metsulfuron, Chapparal, Milestone, and other post-emergent herbicides can be used to manage Smartweed. While 24-D does not provide as excellent a level of control as some of these other medicines, it is quite effective when combined with metsulfuron.

And while smartweed is abundant in North and South America, it may also be found in other regions of the globe. As a result, we may infer that smartweed is neither wholly safe nor completely dangerous to humans. And that it is simple to cultivate and, if properly cared for, may be beneficial to us.

As a result, you may utilize these instructions and information to assist you in planting Smartweed. Now is the moment to properly sow your seeds according to the instructions above so that you can enjoy the seasons. 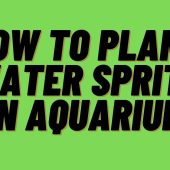 How to Plant Water Sprite in Aquarium 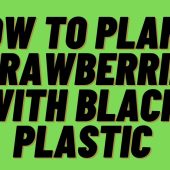