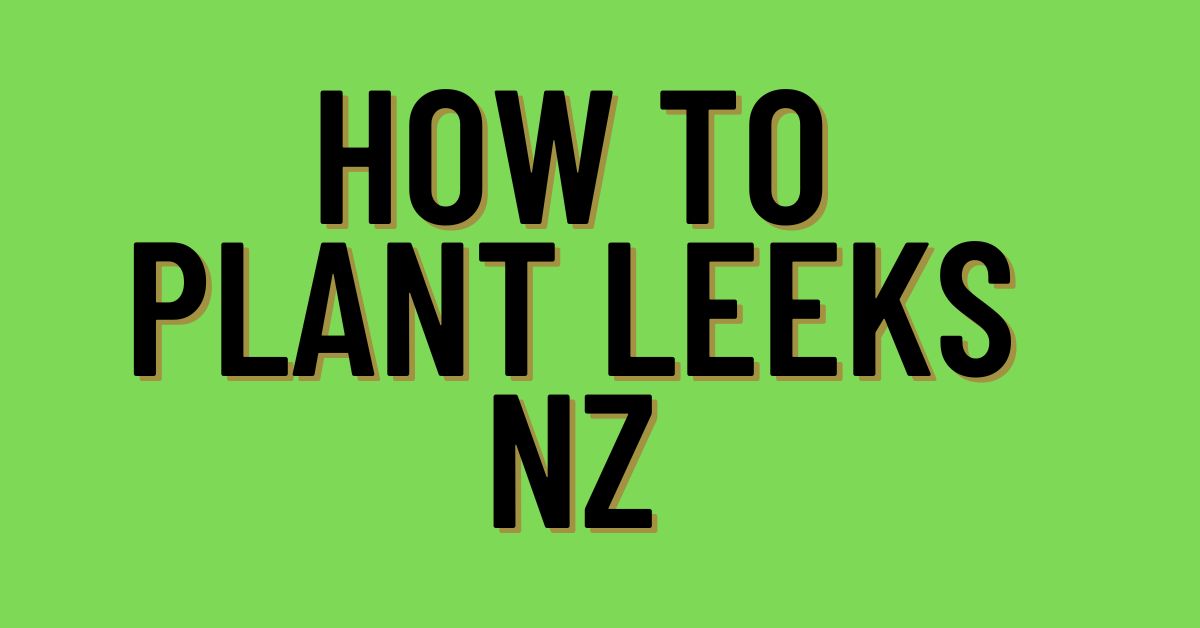 How To Plant Leeks NZ: Follow The Easiest Steps Ever

Leeks are hardy vegetables that can withstand cold and snow in most climates and then be harvested as needed. Early-season leeks are less resilient, although they are still acceptable for harvesting in October, mid and late-season leeks give smooth stems for winter and spring use. By blending cultivars, you may increase the period between harvests.

Their towering blue-grey foliage not only looks great but may also aid in the prevention of carrot root fly infestations by hiding the aroma of the juicy carrots. Leeks have a milder, sweeter flavour than onions, and their flavour is less powerful than that of their onion counterpart. According to some reports, rubbing crushed leek leaves on insect bites may help relieve the discomfort of a sting.

Although leek seeds are around the same size as onion seeds in terms of size, they may be germinated in trays rather than immediately planted. Leafy green seedlings appear in the form of wisps, similar to grass plants, and are a delicate shade of green. Once the seedlings have germinated and grown, they should be transplanted into larger pots to continue to grow. This provides the leeks with a head start, and the plants should be rather sturdy, with erect branches roughly 200mm tall by the time they are planted in the ground.

Leeks are perfect for dishes that call for a softer onion taste than what is often found in onions. However, you must ensure that they are correctly planted in order to do this.

And we will be discussing planting them within the whole article.

Let’s have a look at how to Plant Leeks NZ. Let’s get this party started;

How To Plant Leeks NZ

According to the USDA, leeks grow best when planted in a sunny, sheltered position with well-drained soil. They make a good crop for the allotment since they will stay in the soil for a lengthy amount of time. Many kinds, on the other hand, have attractive leaves, making them a great vegetable to grow in flower borders or in an ornamental potager as a decorative vegetable.

But to enjoy that, you have to plant them properly.

Here’s how you plant them: 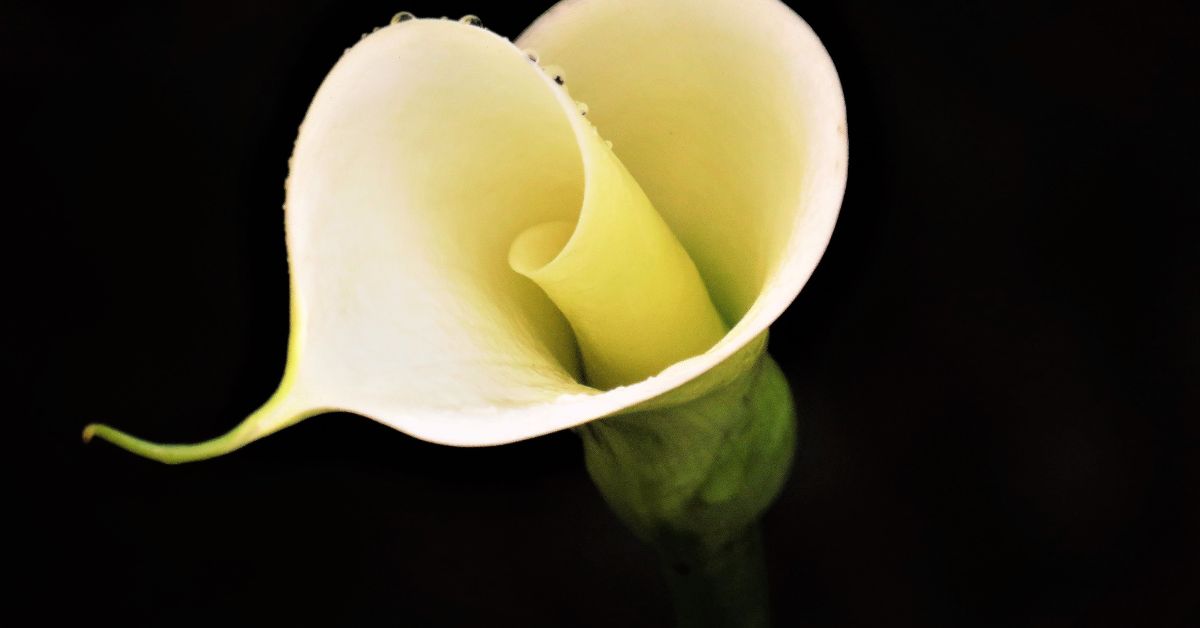 Wild leeks thrive in forests that have a lot of organic matter in the soil from decomposing leaves. But not in such a way that the ground becomes inundated.

Leeks like a pH between 6.0 and 7.0, as well as a high concentration of organic materials. Phosphorus and potassium should be applied in the amounts advised by soil testing. This is a promising indicator. In the absence of a contrary indication from your soil test, use a low- or no phosphorus fertilizer. Make sure to amend your soil with well-rotted manure or compost in the spring.

If you remember to relocate them when the rotation changes, you’ll give the soil a second opportunity to destroy the spores, increasing the likelihood of success. The application of lime to the soil Leeks, like other members of the onion family, such as lime, integrate well into your cabbage rotation scheme.

You should be able to see soil that has a significant amount of dark organic matter, which will both feed the leeks and temporarily store moisture for their thirsty roots throughout the growing season. Plants in colder regions are more vulnerable to frost because of the richness of the soil.

To grow well, leeks need a sunny, sheltered area with well-drained, well-prepared soil that has been liberally mixed with manure or fertilizer. For conventional planting, use a dibber to dig a hole 20cm deep, then insert a seedling in the hole and cover it with water to keep it moist. In the right application of this technique, known as ‘puddling in,’ you will end up with large single leeks with perfectly blanched stems.

Seed leek thinly, 1cm (12in) deep, and 15cm (6in) spacing in rows 15cm (6in) apart during the months of March and April. In the event that you don’t have enough space outdoors or merely want a few leeks, you may start them inside in modules and transplant them outside once the weather warms up a little. Each module should have a single seed placed in it.

Optimal development for the majority of leeks requires a long growing season of around 120 to 150 days in addition to at least eight hours of bright sunlight every day for the best results. Some current cultivars may achieve maturity in as little as 90 days, making them the most suitable for Minnesota’s climate and growth conditions than previous generations. In northern climates, seeds should be sown indoors in late February or early March, depending on the season.

Seed compost may be used to start leek plants from seed. Sowing is a straightforward process. Fill pots or trays with potting soil that has been sieved. Sow seeds very thinly to fall apart and push the potting soil up.

Plant two seeds in each of the four cells of a plug tray. Fill up the gaps with more potting soil and water them. Maintain the moisture level of the seedlings as they grow.

Apply a thin layer of seed compost to the surface and water it in with a rose fitting.

Leeks should be planted close together, with about a finger length of space between them, and then thin them for soups and pies so that you end up with giant leeks with a gap of about a hand length between them.

Allowing your young leeks to grow outdoors for one to two weeks will help them get used to their new environment before transplanting them. When they reach a height of 6-8 inches (15-20cm), it is time to plant them.

Then, using an ice block stick or an old butter knife, make a series of tiny holes about a finger length deep and place a seedling into each one. Repeat with the other seeds. Fill your tiny holes with water, but don’t bother trying to backfill them with soil since it will worsen the situation.

Although leeks are not picky eaters, it may be necessary to use a soaker hose to keep the soil moist when growing them. Water-soluble plant food should be used to feed your plants one week after being transplanted. Leeks may be picked once they have grown to a point where they are edible.

Keep moisture in the soil by watering plants regularly, especially during dry spells, and hoeing or using a thick mulch to keep weeds out.

Taking the main stems off the plants avoids their growing into unmanageably long and knotted strands. Leeks have a basal plate that produces new leaves, and that’s exactly what you want: a thickening of each seedling to the thickness of a pencil, appropriate for planting out in June or early July once it has grown to a pencil-thickness.

Simply cut the green section of the stem to a length of 3 to 5 inches using a pair of sharp scissors to get this result. Trim the hairs one more time before beginning the hardening-off procedure.

The roots of a leek stalk may also be utilised to start a new plant by cutting them off at the base. When ready to use, just cut off the top, leaving at least an inch of the stalk at the end while keeping the roots intact. It is possible to begin gardening when the seedling has sprouted two to three inches of new growth on the top of the plant.

Onions and wild ramps, high in nutrients and valuable chemicals, may aid in weight loss by lowering inflammation and combating heart disease. They may also aid in preventing cancer by blocking the development of germs that cause cancer. Additionally, they may aid in the reduction of blood sugar levels, the protection of the brain, and the prevention of infections, among other things. 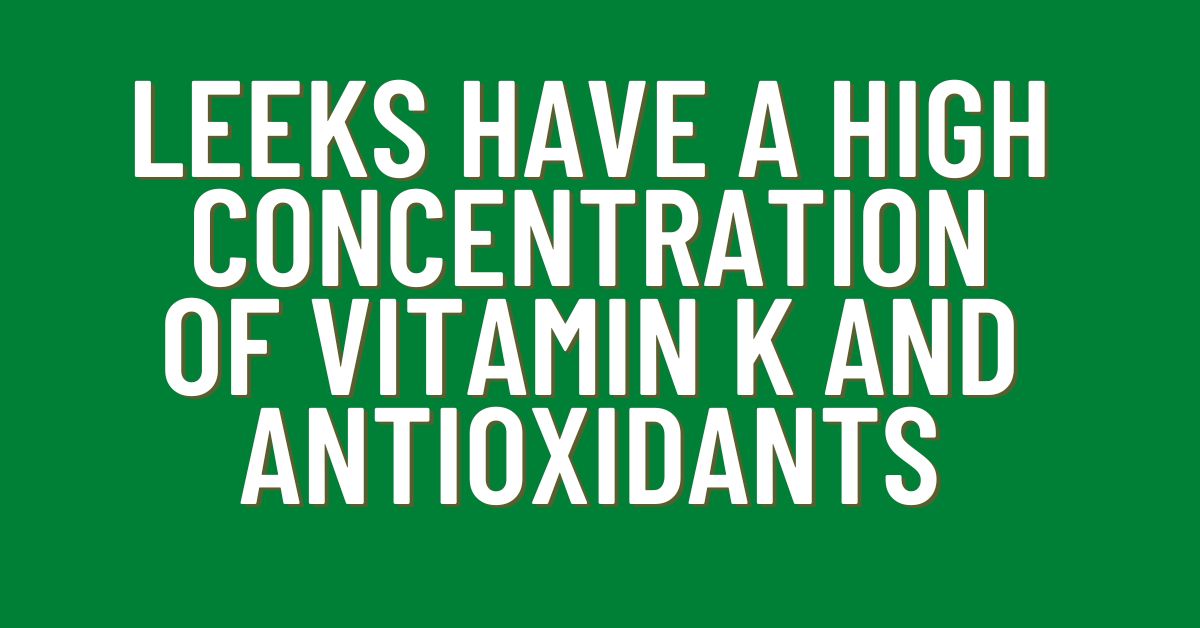 What time of year do you plant leeks?

Although leeks are relatively simple to cultivate, they need a fair amount of time and effort. They are seeded in pots or seedbeds before being transplanted to their ultimate location a few months later. From the time you plant in the spring until the end of the winter, you’ll be able to harvest.

A long growing season of 120 to 150 days and at least eight hours of solid sunshine every day is required for most leeks.

Why are my leeks not growing?

Even though the leaves of leeks may be eaten, the plant is generally cultivated for the stem. The most evident reason for thin leeks is overcrowding. Spreading seeds or planting sets too near together might cause this problem. Obviously, the plant requires a lot of room since it is being cultivated for its underground stem.

Although gourmet baby leeks may be picked considerably sooner than standard leeks, they should be harvested when the stems are roughly 2.5cm in diameter. They may also be kept in the ground until they are required. However, if you leave them for an excessive amount of time, they may begin to form a seed head, which will reduce the quality. With a garden fork, gently dig each leek out of the ground. Pulling the top will very certainly result in it snapping in half.

Fungal illnesses might develop as a result of an excessive amount of water. When you rinse, be sure to water the soil rather than the leaves of the plant. It is sufficient to get one inch of rain every week.

Planting, growing, and caring for leeks are all accomplished in this manner. We hope it will be of use to you.

How to Plant Yam Bean 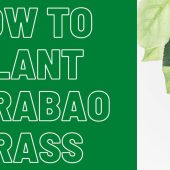 How To Plant Carabao Grass seeds